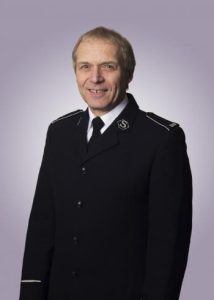 As Bandmaster of The International Staff Band, Stephen has led the band in recordings, concerts and international tours, as well as shared concert and recording projects with both Black Dyke Band and Cory Band. Innovative projects having included the Together CD produced under the Universal Classics & Jazz label which sold over 250,000 cds and the recently completed Heritage Series CD, providing a historic collection of Salvation Army music literature from 1930s to 1990s.

A music educator by profession and training (his initial degrees being the MA and BA (Hons), in July 2006 Dr. Cobb completed the degree of Doctor of Musical Arts in instrumental conducting at Salford University. Since April 2001, Dr. Cobb has been serving as Territorial Music Director for the United Kingdom Territory with the Republic of Ireland, overseeing aspects of Salvation Army musical activity.

Stephen is a member of the Hendon corps in North London, where he currently conducts Hendon Salvation Army band, and also our Territorial Youth Band.