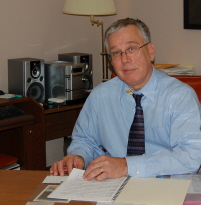 Bandmaster Ronald Waiksnoris has served as conductor and musical director of the New York Staff Band since 1992, taking the band to new heights in musical performance, programming, recording and musical ministry. Under his leadership, the band has successfully toured Australia, Europe and Scandinavia, impacting the brass banding community with its imaginative concert style and programming. Recordings during his tenure-featuring Hollywood composers Bruce and Bill Broughton, trumpet soloist Philip Smith and tuba soloist Patrick Sheridan – have been artistically and critically acclaimed.

Conducting the New York Staff Band is only part of Bandmaster Waiksnoris’ responsibilities as Territorial Music Secretary of The Salvation Army’s Eastern Territory, a position he has held since 1984. As Music Secretary, Bandmaster Waiksnoris oversees music and arts programs in a 12-state area, including music publications and music education programs. In addition to his administrative duties, he also makes frequent appearances as a guest conductor and adjudicator of brass bands.

Like many Salvationist musicians, Bandmaster Waiksnoris received his early training in The Salvation Army before studying trumpet at Hartt College of Music. Following his graduation from the University of Massachusetts (Boston), he enjoyed a long and distinguished career as a cornet soloist with the New York Staff Band prior to becoming its bandmaster.

The BBC has greatly enjoyed performing under the baton of Ron Waiksnoris on multiple occasions.