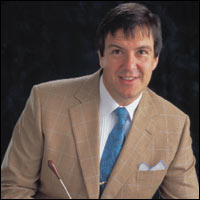 Dr. Nicholas J. Childs DMA, MA, FLCM, ARCM (Hons) Heralded as a leading figure in the worldwide brass community, Professor Nicholas Childs (DMA—Conducting, University of Salford) has rightfully achieved the highest international reputation as a performer, teacher-clinician, conductor, interpreter and advocate of new music, and producer of pacesetting recordings.  Initial success came as a euphonium soloist and partner with his talented brother, Dr. Robert Childs, who together have literally toured the world as The Childs Brothers, performing in many of the world’s most famous concert halls with the most prestigious bands and orchestras.  Taking up the baton as a brass band conductor, Nicholas has had phenomenal success with many brass bands, including highly acclaimed regional and national championships.  His current tenure as Principal Conductor and Music Director of the famous Black Dyke Band has been marked with significant contest success, as well as a series of innovative concerts, world premieres, and recordings of major works for brass band with a variety of soloists and musical combinations.  He continues his advocacy of new music within the outstanding catalogue of brass and wind band recordings he has recorded and produced in his award-winning firm, Doyen Recordings.  Not content with these activities, Professor Childs is in great demand as a teacher, clinician, and consultant throughout the academic community.

In the brass band contest scene he has reached the pinnacle of success with six National Championships of Great Britain: 2001, 2004, 2008, 2009 and 2014 with Black Dyke Band and 1999 with Fodens Courtois. With Black Dyke he has also won the coveted British Open in 2005, 2006 and 2014, and the European Championship in 2005, 2012 and 2015. He won his first English National Championship with Black Dyke in June 2009, and won again in 2011, 2012 and 2013. Further conducting success in the contest field has come with National Championship wins in Sweden, France, Scotland (4 times), Wales (3 times), and Norway (5). Further honours have come with his appointment as Artistic Director of the National Children’s Brass Band of Great Britain, and Founder and Artistic Director of the Yorkshire Youth Brass Band. In 2006 Professor Childs received an honorary doctorate and in 2008 he accepted a Professorship from Leeds Metropolitan University.  In 2007 Nicholas Childs received the Iles Medal from the Worshipful Company of Musicians in recognition to his outstanding contribution for the brass band movement. A year later (2008) he was awarded the Freeman of the City of London. Most recently Nicholas was awarded a Professorship at the Royal Northern College of Music.   College principal, Professor Linda Merrick, revealed that “We are very proud to be able to honour Nicholas Childs’ outstanding contribution to the music profession with a professorial title and I look forward to working with him as we enhance our brass band offer at the Royal Northern College of Music under the aegis of the new Philip Jones Centre of Brass.”

In recent years Professor Childs has premiered with Black Dyke Band many new works by leading British composers. A representative, selective list since 2001 includes: Michael Ball–Cambrian Suite; Arthur Butterworth—Variations and Fugue on a Theme of Handel; Martin Ellerby–Concerto for Trombone and Brass Band; Peter Graham—Journey to the Centre of the Earth; Edward Gregson—An Age of Kings;; Peter Meechan—Pulse Fiction; Rodney Newton—Lancashire Fantasia; Ian Wilson—Seascapes; Philip Wilby–Concerto 1945 for Cornet and Brass Band. In June 2000 he directed Fodens Courtois Band in the premiere of Edward Gregson’s significant work,Trumpets of the Angels. He followed this with the Royal Northern College of Music Brass Band’s first presentation ofDanceries by Kenneth Hesketh.

The Sunday Times reported at the July 2006 world premiere of Elgar Howarth’s Boddington Variations that “Nicholas Childs’ direction proved scintillating.” With Philip Wilby as Musical Associate of Black Dyke Band and Paul Lovatt-Cooper as Composer in Residence of this famed ensemble, Nicholas has presented innovative concert programs with new and appealing music. Representative of these achievements was Peter Graham’s Call of the Cossacks performed at the 2002 Gala Concert of the European Brass Band Championships.  With Black Dyke Band Professor Childs has featured in some of the most recognized festivals, including the Harrogate International Festival, Chichester, Newbury, Cheltenham, Kings Lynn, City of London, and Gala Concerts at the National Brass Band Championships in London’s Royal Albert Hall. In 2007 he made his conducting debut at the BBC Proms held at the Royal Albert Hall, London.

Nicholas Childs has pursued a series of pace-setting recordings of much of this new music, including Doyen releases showcasing the music of Michael Ball, Arthur Butterworth, Peter Graham, and Edward Gregson. With the International Staff Band, he and Black Dyke released the award winning Heaton Collection, now in three volumes.  In the Autumn of 2003 he released a dynamic new recording celebrating the centenary of the dean of 20th-century brass band composers, Eric Ball (1903—1989).  Along with the band’s multiple-CD celebration of their 150th year (2005), Jewels in the Crown, the Butterworth, Eric Ball, Gregson, and Heaton discs were declared CD of the year in the period 2001—2005 in the British brass band press, and Professor Childs was awarded Conductor of the Year in 2005. Two recent discs have received further critical acclaim., including the Black Dyke Elgar recording in which Nicholas Childs shared the baton with Sir Colin Davis, and Symphonic Brass on the Naxos label, a recording that remained in the Classical top 20 for 18 weeks.

As one of the world’s most recognized masters of the euphonium and brass specialist, Nicholas has performed and taught throughout the United Kingdom, Europe, Australia, Africa, the Far East, Canada, and the United States. He has appeared with such groups as the BBC Philharmonic, Hallé Orchestra, United States Marine Band (“The President’s Own”), the London Symphony Brass, and the Canadian Brass.  In addition, he has been featured with nearly every major brass band throughout the world and many wind bands, especially in university settings with the United States, where he has been equally acclaimed for his teaching and clinic work.