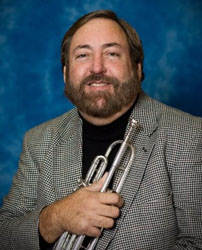 John Harner is a freelance trumpet player, music educator, clinician, and conductor that performs at clinics and concerts throughout the United States, including performances with The Ohio State University Marching Band, as well as the Purdue and University of Tennessee Marching Bands, and the British Brass Band of Columbus among others.

He is a former 1st-Trumpet player of the Stan Kenton Orchestra and has recorded 3 CD’s with them including: “Kenton Plays Chicago, “Fire, Fury, and Fun,” and “Kenton ‘76,” where he is the featured soloist on Send In The Clowns. He also was the 1st Trumpet player at the Dunes, the Sands, and the Sahara Hotels, from 1977 until 1984 and the split-lead player at Caesars Palace in 1983, performing for entertainers that include Johnny Carson, Don Rickles, Jerry Lewis, Vic Damone and others.

He has recorded 5 CD’s with the Jim Widner Big Band, as their 1st trumpet. This group does summer jazz clinics in Missouri and California, where the focus is teaching students, ages 13-to-adult, how to play jazz in a Big Band. This group tours the Midwest each spring and has appeared at The International Association of Jazz Educator’s convention in 1997.

John was a music educator in the Xenia Community Schools for 25 years, where he directed three Middle School bands, and the XHS Jazz Band. He was the former Director of the Xenia Marching Band which performed at Disney World two times as part of Disney’s Magic Music Days Parade and has also performed at Bands of America Grand Nationals in Indianapolis twice.

The Xenia Jazz Band has also performed at Universal Studios, Disney World twice, and twice at the Navy Pier in Chicago. He is also the Director of the Cedarville University Pep Band and is the adjunct trumpet instructor at Central State University.

In April of 2001, John toured the East Coast with The Stan Kenton Alumni Band, under the direction of Mike Vax, and performed at jazz clubs, and presented clinics and concerts at high schools and colleges.