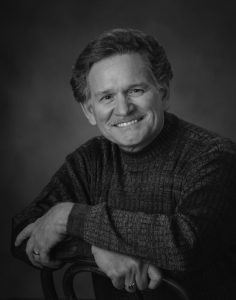 A long time friend of the Brass Band of Columbus, James Curnow is one of the most respected and internationally celebrated active American composers. He received some of his earliest training in the Salvation Army Instrumental Music program, a debt he later repaid as editor of their music publications. He did his undergraduate work at Wayne State University and earned his Masters of Music from Michigan State University, studying euphonium with Leonard Falcone and conducting with Harry Begian. His composition teachers were F. Maxwell Wood, James Gibb, Jere Hutchinson, and Irwin Fischer.

He has over 400 works in his catalog, mostly tonal, many of which take their inspiration from literature. He is widely known for his symphonic band and brass band works, several of which have won major awards: Symphonic Triptych, Collage for Band (ASBDA/Volkwein, 1977, 1979), Mutanza, Symphonic Variants for Euphonium and Band (ABA/Ostwald, 1980, 1984), and Lochinvar (Coup de Vents, France, 1994).

His prolific output for young musicians reflects his many years teaching at the public school and college levels. Jim continues to be active as a conductor, clinician, and music educator. He also founded and presides over Curnow Music Press, Inc.  Jim has conducted the BBC on numerous occasions: