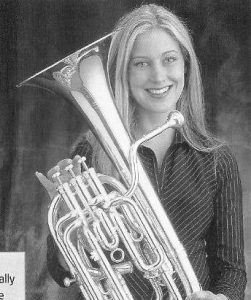 Helen Harrelson née Tyler began her playing career aged 10 on euphonium with the Rotherham Schools Band before progressing to the National Youth Brass Band of Great Britain aged 16. She later changed to baritone and was accepted at the Royal Northern College of Music where she studied with Steven Mead.   Upon commencing her studies at the RNCM, Helen joined the Black Dyke Band with whom she toured Bermuda and Canada.

After two years at Black Dyke, she accepted the offer to join Foden’s Brass Band on solo baritone—a position she still holds today.   In June 2001 Helen traveled to the International Tuba and Euphonium Conference in Finland to perform with the Lahti Symphony Orchestra. This was the first time a baritone player had been a featured artist at the event. Following this she has given many lecture recitals on the baritone both in Europe and the USA and is also a guest artist for the International Woman’s Conference.

The majority of Helen’s work is as a brass tutor for Bolton and Thameside Music Services as well as being heavily involved in various other educational projects in the UK and abroad.   One of Helen’s main ambitions is to expand the profile and repertoire of the baritone both within the brass band tradition and other wider musical circles.

The BBC is pleased that Helen performed with us as a Guest Soloist on her incredible road to musical artistry.

Helen Tyler is one of four Baritone musicians¹ featured on the BBC recording:  Baritones to the Fore