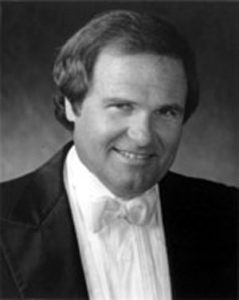 Prior to his appointment at Ohio State, he served in a similar capacity as director of Bands at Washington State University, before which he was the associate director of Bands at the University of Wisconsin-Milwaukee. Under Professor Kirchhoff’s leadership, the OSU High School Honor Band was initiated, bringing the state’s most talented high school students to campus. Moreover, the Concert Band continued to flourish, maintaining the high performance standards and national profile established by his predecessor. Some of Kirchhoff’s proposed changes to the band program received opposition from Concert Band alumni. For similar reasons that Weigel chose the name “Symphonic Band,” rather than “Concert Band,” in 1929, Kirchhoff wanted the name of his large-group ensemble to connote the performance of serious works of literature, not the light, entertainment-oriented works often associated with the name “concert band.” He proposed changing the name of the top group to “Symphonic Band,” and the name of the second group to “Concert Band.”

Former band members and individuals who were previously involved with the program saw this as a demotion in former title for Concert Band alumni, as well as an unwanted change to a long-standing university tradition. Diplomatically choosing his battles, Kirchhoff maintained the name “Concert Band” for the large top ensemble, a title that would remain with the group until 1999. The Scarlet and Gray Buckeye Bands were renamed “Symphonic Band” and “University Band,” respectively, in 1979. Kirchhoff also founded the Wind Ensemble, the central concept of which was to place one player on each part, was organized from some of the finest instrumentalists in the School of Music and consisted of approximately forty graduate and undergraduate members, performing wind literature from the Classical period through the twentieth century. The Wind Ensemble frequently appeared in concerts with the Concert Band, with some students serving in both groups. The Concert Band performed a mix of traditional and contemporary music, rehearsing five days a week and performing at least six concerts a year. In addition to joint concerts with the Wind Ensemble, the Concert Band also frequently collaborated with the Symphonic Band, the roster of which included a large percentage of music majors.

During Kirchhoff’s first two years at Ohio State, the bands had very active seasons. Special appearances were given by guest conductor, Karel Husa, in 1980, as well as Verne Reynolds, in 1981, for the premiere of his Concerto for Band. In 1981, the Symphonic Band traveled to Watkins Memorial High School in Pataskala, while the Wind Ensemble appeared at the OMEA Conference in Cleveland and the CBDNA Conference at the University of Michigan.

Thirteen years after the Concert Band appeared in a Carnegie Hall debut with McGinnis, the current Concert Band gave a repeat performance of two previously programmed selections: Dahl’s Sinfonietta for Band, and Grainger’s Lincolnshire Posy, along with selections by Strauss, Holst, Schwantner, and Bernstein.