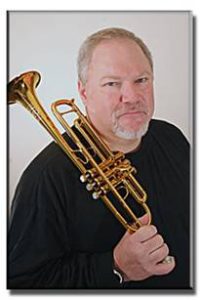 Professional Trumpet Player Chris Jaudes of New York City is one of the most highly regarded and versatile professional trumpet players in New York City. Chris Jaudes was born and raised in St. Louis, Missouri. Chris’s parents played in the Salvation Army Band (Mother played the French Horn and Dad played the trombone) and their experiences were his first introduction to music. Chris received his first cornet at the age of seven and emphatically states that he was in love with that horn from day one. Chris knew that playing professionally was what he wanted to do after receiving his cornet that day. Chris struggled for several years and was not a “natural” player by any means. Chris would literally play for three or four hours every day just trying to establish the correct playing embouchure (warming up). Chris attributes his early playing success to brute strength and relates that he had three major embouchure changes to contend with early on.

After Chris got serious with his playing at about the age of fourteen, he began using Claude Gordon and Carmine Caruso’s trumpet method books in addition to the James Stamp Trumpet Method book. He also began studying orchestral trumpet with Susan Slaughter and Bob Ceccarini. Chris relates that Susan Slaughter taught him a lot about playing musically and Bob helped him get the physical aspects of playing straightened out. Bob demonstrated a lot of patience with Chris as they worked together on the physical aspects of playing. Chris was heavily influenced by great trumpet players such as Doc Severinsen, Maynard Ferguson, Bud Herseth and Allen Vizzutti.

Chris left St. Louis to study orchestral trumpet at Illinois State University obtaining a Bachelor’s in Music and then a Masters in Trumpet Performance. Chris broke his ankle during the second semester of school of his freshman year and had a difficult time getting around. As a result, he would get his lunch and stay in the Music Building while he ate as his dorm was too far away for him to walk. As a result, Chris began listening to the schools jazz ensemble practice and developed an interest. It wasn’t long before Chris was a member of the jazz ensemble and playing the Lead book. Chris studied trumpet with Herb Koerselman while at Illinois State University. He also made frequent trips to Chicago to hear Bud Herseth perform with the Chicago Symphony Orchestra.

The BBC reflects frequently on their experience with Chris Jaudes as a guest trumpet soloist with the 2006 God and Country Concert.