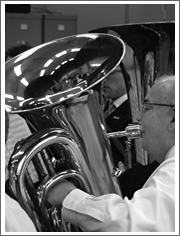 Gary Tirey was a Charter Member of the BBC, and played with the band for over 30 years until poor health prevented his active participation.  Sadly, he passed away on April 1, 2017 and is missed.

Otterbein University on his Passing

During his tenure with the BBC, Gary assumed numerous leadership roles to include coordinating BBC Performances.  Additionally, Gary was a member and then Chair of the God and Country Concert Committee (the annual concert sponsored by the Salvation Army in Central Ohio featuring the BBC and a visiting Salvation Army Band, Ensemble or Soloist(s).

He joined the faculty at Otterbein in 1968, teaching music education classes, directing the marching and concert bands, and giving tuba lessons. When Tirey was hired, the Westerville college had fewer than 50 music majors and only a marching and concert band. By 2006, Otterbein had more than 150 music majors and five bands or ensembles, three of which Tirey founded: the pep band, jazz band, and wind ensemble.

I’ve played in the Columbus Symphony Brass Quintet for a number of years. We have a brass quintet at Otterbein. The dates for the Columbus Symphony would have begun in about 1960, there were two years I took off when I taught in Zanesville, and then that would put me finishing about 1980. At Otterbein, I’ve given a few recitals over time, and we have the brass quintet that functions as needed.

In the 1970s, Tirey started the first Jazz Band, and in the 1980s (with the help of President DeVore) he brought back the traditional Christmas Tree Lighting celebration. He began the tradition of band tours to Europe, taking several trips to Great Britain, and others to France and Italy. Otterbein’s Marching Band played halftime shows for professional football teams including the Buffalo Bills and the Cincinnati Bengals.

On April 2, 2006, 135 former band members performed a tribute concert for Tirey, filling Cowan Hall to capacity. The college has created the Gary R. Tirey Endowed Award in Music to support an outstanding student each year.

He retired on July 20, 2006, after 38 years of service to Otterbein and was named Professor Emeritus of Tuba and Director of Instrumental Music. He was also named an honorary alumnus of Otterbein University.

Gary was also very active in the music community outside of Otterbein and his membership in the BBC.   He was the choir director at Church of the Master for 44 years, and he was the founder and long-time conductor of Merry Tuba Christmas Columbus. In 1982, he was named by Governor James Rhodes as chairman of Merry Tuba Christmas Columbus. He was constantly in demand as a tuba player because of his expert sight-reading skills, and he subbed for groups all over Central Ohio including the Columbus Symphony and the TubaShop Quartet.

Gary was born in Ana, Ohio, which is a small town in western Ohio, in Shelby County in 1940 and spent all of my years in that town until I went to college in 1958. From that point on, he called Columbus his home.