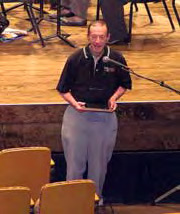 Jules J. Duga was a Charter Member of the BBC, and played with the band for 23 years.  Jules was presented with the Founder’s Award and Emeritus BBC membership at the BBC Silver Celebration Gala.

Jules has a long career in music, having been principal tubist with the Wheeling (WV) and Columbus (OH) Symphony Orchestras.  He was “first call” tubist, playing for all major music events in both communities, appearing with the travelling companies of The Sound of Music, Oklahoma, Showboat, South Pacific, The King and I, and other musicals, and with the Ringling Brothers Barnum & Bailey Circus.  He was instructor in tuba at Capital University Conservatory of Music.

Jules earned a PhD in physics from The Ohio State University, and spent a long working career that included research on the development of new materials for electronic and medical device applications, science policy, and technology development programs in India and Mexico.  He has earned an international reputation as a leading authority on research spending, and has been a consultant for the National Science Foundation, the National Academy of Sciences and the Congressional Research Service.  He was inducted into the State of Ohio Senior Citizen Hall of Fame, and is an Honorary Member of the United States Air Force Band.