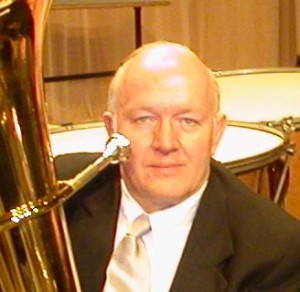 Ray Spillman was a founding, charter member of the BBC from 1984. He played BBb Bass and assumed a prominent role in the band during his tenure as its Business Manager for the first 20 years of the BBC’s existence.

Ray received his BA and MA in Music Education from The University of Northern Colorado.  He played professionally as a free-lance musician in New York City and surrounding east coast area.  Ray has retired from OSU School of Music as instrument repairman, and until fairly recently, was self-employed with his instrument repair business. He has been involved in Music Education as a teacher and provider of services to educators for over 40 years.

Ray was presented the Paul E. Droste Founders award at the annual Trinity Seminary BBC concert held June 17, 2008 at Capital University. He also was an instrument repairman and a tuba virtuoso. Ray continued playing tuba with the band up to and beyond Droste’s retirement, only having to “warm down” due to health concerns. Ray continues to enjoy retirement and supports the band by attending concert, and all in the BBC look forward to those opportunities to reconnect with someone who contributed so much to the organization and is a friend to all.