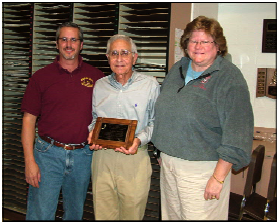 As a founding charter member of the BBC, Les Susi functioned in major administrative roles for band operations for the first 20 years of its existence. He enjoyed a lengthy tenure as Associate Conductor of the BBC under Dr. Paul Droste and occupied a major role in the Solo Cornet section.

As a trumpet player, Susi joined the musicians union at age 14. Over the years, he played in the Chuck Selby, Henry & Ray Cincione, Don Crawford, Francis Carl, Ned Mapes, and Doc Everhart bands, as well as the Columbus Symphony Orchestra. He served as conductor and music director of the Columbus Symphony Youth Orchestra, and was cofounder and co-conductor of Columbus Concert Band. For many years, he taught in the Columbus Public School system, notably at Whetstone High School.

During his legendary days as a prominent Central Ohio musician, Les was found performing beyond his BBC role in such local venues as the Gayety Theater, Club Alexander, The Dugout, Palm Garden, Gloria, Riviera, Deshler-Wallick, The Neil House, Southern and Virginia Hotels—most locations now a part of Columbus history.