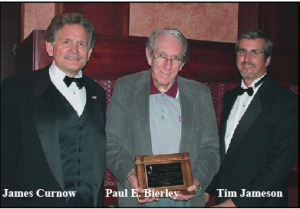 Paul Bierley was a charter member of the BBC, but there is much more to the story of this great man who has provided a musical legacy of immense magnitude:

“Paul Edmund Bierley of Westerville, Ohio, is the world’s leading authority on John Philip Sousa. Paul is a historian, musician, scholar, lecturer and an aeronautical engineer. A 1953 graduate of The Ohio State University with a bachelor’s degree in aeronautical engineering, Bierley worked as an engineer for North American Aviation.

Following his retirement from the engineering field, he devoted his time to pursuing his love of music, especially the life and works of John Philip Sousa. A lifelong musician, he played tuba with the Columbus Symphony Orchestra from 1965 to 1980, and with the Detroit Concert Band from 1973 to 1993. Paul performed with the Brass Band of Columbus from 1984 to 1995.

Bierley has written and is still writing definitive books on Sousa, considered to be the most important figure in the development of the band tradition in the United States. Bierley also formed his own publishing house, Integrity Press, to make available books about band music and musicians that might not find publishers elsewhere.”

The author of the above, BBC Cornetist and Newsletter Editor John Watkins, is joined by BBC former director Tim Jameson and Dr. Paul Droste for a question and answer session with Mr. Bierley.  The purpose:  to ask what motivated the author and “how he did it” regarding his intensive research on John Philip Sousa. John shared the incredible conversation in a series of two newsletter articles viewable via the files listed below for download:

In addition to the many accomplishments and activities referenced above, Mr. Bierley also was a member of Arthur Fielder’s World Symphony Orchestra (1971), and he has been honored with membership in the American Band Master’s Association and received ASCAP’s 1986 Deems Taylor Award along with various other citations. With his son, John Bierley, a cornetist who also played with the BBC for a while, he played in the Village Brass Quintet for nearly two decades. Other BBC members who played in the quintet included Tim Jameson, Eric Aho, Pete Baker, Todd Cunningham amongst several others who sat in with the group on occasion

In addition to his two volumes on the life and music of John Phillip Sousa, Mr. Bierley edited The Heritage Encyclopedia of Band Music, and contributed to many other publications and articles.

At an October 2, 2005 BBC Concert at The Southern Theatre, not only were guests treated to the music of James Curnow, but also a special awards presentation was made to Mr. Paul E. Bierley (in the photo above left: middle) – Mr. Bierley received the Dr. Paul E. Droste Founder’s Award and the honor of Emeritus BBC membership.

Update:  Mr. Bierley passed away on April 9, 2016.  We all lost a tremendous music scholar and friend.