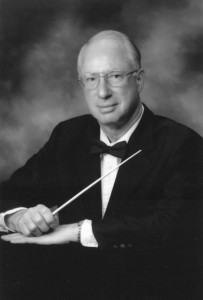 Paul Droste first marched in the Ohio State University Marching Band in 1954 as a euphonium player—returning as a graduate assistant in 1961 for one year. In 1966-68, he served as an instructor in the School of Music and as assistant director of the marching band. However, in Spring of 1970, he was summoned from Tucson, Arizona, in the midst of taking his doctoral exams, to interview for the position of director and accepted the position.

Under his lengthy tenure, the OSUMB experienced many changes, including expansion in its overall size and the admission of women in the mid-seventies with the arrival of Title IX. Paul retired as Director of the OSU Marching Band in 1983 and was succeeded by Dr. Jon Woods who had served as his Assistant Director for many years.

In 1984, he formed the Brass Band of Columbus (BBC)—calling upon a collection of highly skilled brass musicians as its charter members.  Paul had an immense appreciation of the British brass band genre, and at the time, this was relatively unknown in North America. In short order, the BBC was quickly propelled it into the upper ranks of not only nationally-, but also internationally-known brass bands.

After twenty years of prestigious acclaim, Dr. Droste retired as Director of the BBC in 2004 and passed the baton to Tim Jameson in 2005 (tenure 2005-February 2010).  He has been succeeded since 2010 by Brian Stevens.  While not at the podium on a weekly basis, he is far from absent and is now our number one audience member and assumes a key role on the BBC Board of Directors. In 2007, the band honored him by recording “Gifted Leadership” – a CD dedicated to Paul.