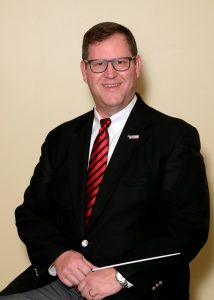 Brian Stevens is currently serving in his eighth year as Director of Bands at Dublin Jerome High School, and his 28th year as a high school band director.  He holds a Bachelor of Music Education Degree from The Ohio State University and a Master of Music Education with Instrumental Emphasis from Capital University.  Mr. Stevens began his teaching career as band and choir director at West Jefferson High School in West Jefferson, Ohio.  During his five years there, his bands and choirs received Superior Ratings at the district and state levels.  Mr. Stevens spent 16 years as Director of Bands at Reynoldsburg High School and supervisor of the district band program.  While at Reynoldsburg, he posted consistent Superior Ratings with the Freshman Band, Symphonic Band, Wind Symphony and Marching Band.  He continues this tradition of excellence today for Dublin City Schools.

In addition to his teaching responsibilities, Mr. Stevens is a frequent adjudicator with the Ohio Music Education Association and served as the Ohio Adjudicated Events Committee as its Immediate Past Band Affairs Chair. Mr. Stevens spent over 6 years as Chair of State Marching Band Finals.

In 2014, Mr. Stevens was called upon to write the drill for a late replacement halftime show for The Ohio State University Marching Band.  He has since returned to subsequently provide the drill for one show per season.

Mr. Stevens is no stranger to the BBC, and was, in fact, a member of the organization in its cornet section for many years as well as a former Assistant Director. He brings a tremendous wealth of experience to his Director’s role since his appointment in 2010—both with a familiarity of the organization and the brass band genre.  Mr. Stevens is the recipient of the 2014 God and Country Music Award.  He resides in Dublin with his wife, Julie, and their three children, Daniel, Hannah, and Nathan.