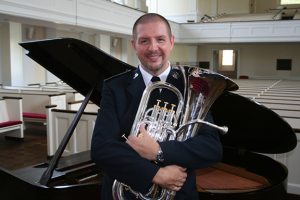 Aaron VanderWeele received the prestigious International Euphonium Player of the Year Award in 2007. He has been Principal Euphonium and Euphonium Soloist of the world famous New York Staff Band since 1993, where he has played his euphonium all over the world, including esteemed venues such as Royal Albert Hall, London, and New York City’s Avery Fisher Hall and Carnegie Hall.

Aaron has been a featured soloist on over 20 professional recordings and is regularly in demand as a soloist and clinician, both in and out of The Salvation Army. Along with his family, he attends the Montclair Citadel where he coordinates the Army’s Music Mentoring Program, leads the Young People’s Band and is a member of the Montclair Citadel Band. His favorite thing to do is to work with aspiring musicians of any age and ability.

“In 2003, Stephen Bulla wrote a solo for Aaron VanderWeele to play when the New York Staff Band went to Albert Hall. The play on words Air’n Variations makes use of VanderWeele’s Salvation Army heritage with the tune ‘twas a very happy day’ and his interest in the tone poems of Hindemith to create a showpiece for the euphonium. It includes a fairly ponderous sounding waltz interlude, and concludes with a spectacular race to the final sustained high F finale.”¹

¹ Source: 4barsrest.com – a review on the 2007 Hannaford Festival of Brass Performance